I was waiting for Him Indoors to decide on a solid colour for his third union jack for the Jack Attack quilt, he has now decided on black (which I must order!)

so in the meantime I have been making a few more Kaleidoscope blocks. 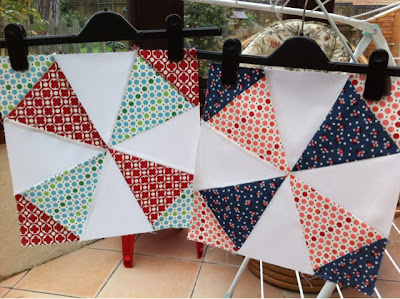 It was raining really hard to day so I had to hang them on the airer in the conservatory for a picture!  There are more than those pictured, I'm up to 10 blocks now plus 2 that I paper pieced (an idea which I gave up on) which are slightly smaller, maybe I could use them on the back...

No progress yet on any more Super Mario blocks... :-( 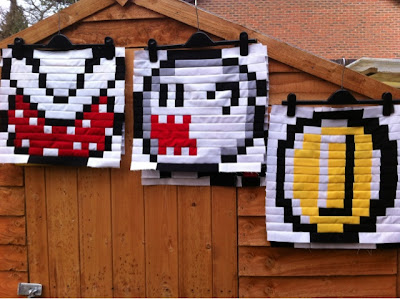 And finally, here is the lovely piece of lace I bought in Bruge.  I have hung it in the dining room window which I face when sewing, which faces the side of my neighbours house - such an interesting view! Hopefully you can just about make it out! 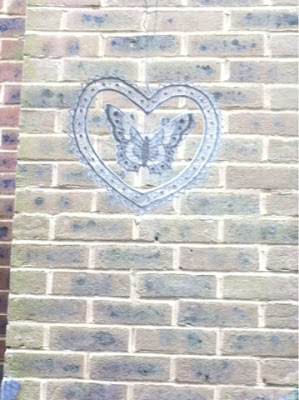 Oh and I joined my first bee! Sarah over at Sew Me is organising a few of us to make churn dash blocks for a Siblings Together quilt.  For those of us that couldn't commit to a whole quilt but who wanted to take part this was such a great idea, and there might still be spaces left if anyone would like to contribute.  I'm quite excited about this, I have been thinking of joining a bee for a while but am anxious about my ability to keep up, make the trickier blocks and the costs involved etc., but I can certainly commit to a couple of churn dash blocks for such a good cause!﻿
Right, I'm off to order that black fabric, have a glass of wine and watch Deadliest Catch. :o)
Linking up to;
Show and Tell Tuesday at I Have to Say
Fabric Tuesday @ Quilt Story
Linky Tuesday @ Freemotion by the River
WIP Wednesday @ Freshly Pieced﻿
Posted by Karen at Tuesday, May 14, 2013

Your bee will be wonderful with Sarah at the helm. And all your projects are looking great.

What fun projects and hope you enjoyed your wine and your black fabric gets to you soon! Thanks for sharing.
Freemotion by the River Linky Party Tuesday

Karen
Hampshire, United Kingdom
Hello & welcome. I'm a 30's married, stay a home mum to 2 boys, aged 5 and 7 years. As well as quilting I love to cook. Thank you for taking the time to look around, please feel free to leave any comments.

You Can Also Find Me On

Get this widget at roytanck.com 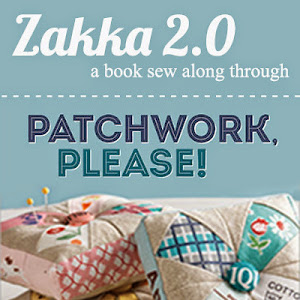 Irons are for Crafting